I fear losing the collective memory of a generation, a very unique generation. Born in the 1930s we are small in number and all aging into our 80s. We are what I call “The Last Ones” We are the last who can remember the war, it’s rationing, its tensions and its joyous end.

We are also the last ones who grew up feeling safe. By the mid-fifties all that began to change. 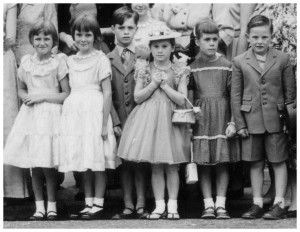 Some call us The Silent Generation. That may be the case, but I hope this blog can capture and celebrate the memories of other children of the 1930s from around the country. The focus has been the post war years of 1945 to 1955, but that can change with your guidance.

I know there are lots of nostalgia pieces flying around about old time radio shows, 78 rpm records, and the candies we had back then. That's not what I’m hoping for. I'm hoping this blog can capture our stories and feelings and observations of those times.

Please read on.
Share this blog so that more can remember, some will learn and none may forget

If you didn’t live your childhood during World War II, please read one account (mine) below.   If you did live through the war, what are your war time memories?  Submit your story – or just a comment – below.  I’ll share them.
“If the Japanese win any more battles they could win all the way to California,” I heard my grandmother say.  She was sitting at the scarred desk that served as the hub of our small dairy farm speaking on our only telephone.

I was sure I shouldn’t be listening so I slipped out to be with the men in the dairy.

I had I overheard some of the men talking about how all the Japanese out west were being rounded up and sent out to the desert. Today they were talking about which of their friends were going off.  We were a Navy family – my father and two uncles were gone. Two of our men were headed for the army. That would leave just my grandparents, my mother, my Uncle Carl, and me to handle the farm.  We did share help and work with our neighbor farms.
END_OF_DOCUMENT_TOKEN_TO_BE_REPLACED

Every day we pooled our eavesdropping, snooping and overheard talk of war from each of our homes. Roosevelt’s radio talks were occasions for excitement and serious deliberation by adults. We watched adults closely for signs of fear.  We figured out they intended to keep bad news from us. They didn’t want us to be afraid and I think they did a pretty good job. (I never heard Edward R. Murrow’s chilling reports from London until I was a grown man.)

END_OF_DOCUMENT_TOKEN_TO_BE_REPLACED

Almost everyone from our era shares this common experience: we went to the Saturday matinee at the local movie.  It was part entertainment, part social and part tribal.

“Gene Autry, a war movie, (maybe Tarzan) seven cartoons and a serial!” That was Saturday afternoon at the movies for many of us.  Boys never sat with girls.  We threw popcorn. And the noise level was deafening.  Here is my account of one such Saturday afternoon and a story that made two of us  minor legends.

He was big and I was fast. It wasn’t talked about, it was just understood the way kids understand things among themselves.  My cousin Dick at 13 stood as big as some of our teachers and I could run like the wind. These facts took on significance on Saturdays as we prepared for the matinee at the Hollis Theater.

Our Saturday matinees were probably like Saturday matinees everywhere in the 40s and early 50s.  We saw two features, usually one western and a war picture. Five cartoons ranked OK but seven was better. The serials, though, were pretty poor. We could always spot where they changed something that allowed the hero, who was doomed last Saturday, to cheat death this Saturday. The oldest of my four cousins did like Nyoka the Jungle Girl, however.

END_OF_DOCUMENT_TOKEN_TO_BE_REPLACED

Rosie the Riveter and the Stay at Home Mom

World War II disrupted not only world order, but order here on the Home Front.  Industries which had made consumer goods like cars and appliances shifted over to wartime production. Everyday routines were disrupted by rationing and blackouts.

But no groups were more disrupted than women and blacks.  (Excluding, of course the terrible disruption of Japanese Americans interred in camps.)

For many women, the primary disruption was the removal of men – husbands, fathers, brothers, sons – from their lives.  A substantial number of women not only entered the workforce for the first time, but many found that they enjoyed the feeling of competence and independence a job provided.  Rossie the Riveter became an icon.

A second, and longer lasting, disruption occurred when men came home expecting that life would return to pre-war norms but were confronted by wives who chose to remain working.

Employers had become accustomed to women in the work force and now, with the post-war economic boom, the door for women’s’ opportunities was nailed open.

In 1941 the percentage of women who worked outside the home was 25%, mostly in low level clerical work, or as nurses and teachers.  In one generation that percentage doubled and today is estimated at 70+%.

For more on this,  I’m re-sending, below, an earlier blog post from last April.

If you have a story about women on the home front, please send it along.

The Short, Mythical Era of the Stay at Home Mom

Ah, the stay at home mom!  The 1950s, a time when moms stayed home and baked cookies and all was perfect.  It’s a myth.  What was your experience?  Did you have a stay at home Mom or were you, like so many, a latchkey kid, outside, finding out about the world on your own?
Post your growing up stories – or just a comment – here.  I’ll share them!

Those were the days.  Dad went off to work while Mom stayed home and took care of the house.

No, it wasn’t.  That idealized image did exist, but only for a short time, maybe little over a decade.  Like so many things, this phenomenon requires going back to the WWII era.  In the early 1940s the 25% of women working outside the home mostly followed traditional roles as teachers, nurses, and office assistants though some worked in sewing and other factories.

By 1945, at the height of the war, about one third of women worked outside the home, the increase caused by their working in war production factories.  END_OF_DOCUMENT_TOKEN_TO_BE_REPLACED

HomeFront A Memoir From WWII